The University of Pardubice is the only university type institution in the Pardubice Region. There are seven faculties overall and its more than 9 thousand students make it one of the medium size public universities in the Czech Republic. The Information Technologies study programme is mainly intended for teaching professionals who will be able to design, realise, and operate information systems and their modules for the support of learning, administrative, and management activities in companies and other organisations.

Raydesk 3.0 brings a host of new features, with the most important being better user experience and ease of use for administrators.

Bachelor studies are primarily focused on the area of information technology from the point of view of information processing methods, programming languages, database building and administration, and application of system analysis. Graduates also acquire basic information in theoretical subjects, such as mathematics, statistics, and basics of light-current electrical engineering. The students are also provided with the basics of economics, management, marketing, and language training in English and German.

The University of Pardubice has a number of computer classrooms. One of them has been equipped with the ultra-thin Sun Ray terminals for some time. The main server runs the Sun Solaris 9 operating system and users work with the Java Desktop System graphical interface. This environment is based on Gnome, is quite demanding when it comes to hardware resources, and most importantly, it doesn't restrict the user's choice of applications. This has had two results. First, lack of performance for scientific and development tools, such as NetBeans, and second, use of unauthorised applications during exams. 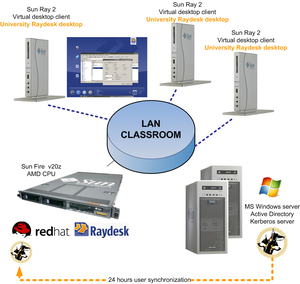 The solution to the aforementioned problems lies in substituting the resource-hungry and unsuitable Java Desktop System with the Raydesk virtual desktop. Raydesk is much more thrifty of resources. The solution was designed to introduce as little changes as possible into existing infrastructure. The main Sun Fire V20z server was left in place, but the Solaris operating system was replaced with Red Hat Enterprise Linux. The main advantage was a greater number of localised applications, including Matlab.

User administration was an uneasy task. The client's primary request was to utilise the existing student and faculty data storage which necessitated the synchronisation of identities from the central MS Active Directory storage with the requirements of the Raydesk desktop. The central server running Red Hat Enterprise Linux and authorisation layers of the Raydesk virtual desktop were configured to authorise against Microsoft Active Directory, with a Kerberos server being the middleman. Kerberos runs on the same MS Windows Server 2003 as MS Active Directory while a local agent is installed on the Red Hat Enterprise Linux server.

The identities are synchronised once in 24 hours, always in one direction only. The university can thus keep its existing identity management in one place, without the need for duplication. The Kerberos system creates a new set of local users in Red hat Enterprise Linux every day, including their access passwords which are then used by the Raydesk virtual desktop.

The supplier, Stickfish, s. r. o., approached us with a presentation of future development of desktop solutions with regard to energy consumption, but more importantly, central administration and maintenance. Stickfish appeared to be an expert in the area of desktop solutions built on the Sun Ray terminals. As there already is a classroom within the faculty equipped with the Sun Ray clients, we were looking for an efficient desktop solution for the user's desktop. Because open source solutions undeniably belong to the academic ground, we had gone through a few tests of the Sun Java Desktop, GNOME and other desktops. Given the server equipment of the classroom, the original solution from Sun did not suit us very well, especially with regard to system requirements for server resources.

We also requested a unified central user administration because students change classrooms very frequently and different tools are used for teaching different subjects. Changes to configuration and parameters burden classroom staff beyond regular classwork. For this reason we found Raydesk a suitable solution fulfilling our unique requirements, and we were surprised to learn such product was available on the market. Implementation itself went smoothly thanks to a preparation of a test pilot. Pilot operation also included connection to the MS Active Directory central identities management. Stickfish was able to handle this requirement as well before the seamless transition to live operation.

Stickfish is an ICT company specialising in enterprise Linux and Unix technologies. Its strategy is to supply complete solutions: from analysis of requirements and the finding of the best solution, to training and subsequent technical support or outsourcing of maintenance. Stickfish provides solutions from leading vendors such as Sun, IBM, Red Hat, Oracle, or VMware, advanced networking products from Juniper and Cisco, and also its own highly secure and fast enterprise desktop solution, Raydesk. Stickfish operates the popular electronic store 64bit.eu and the technically oriented Internet portals AbcLinuxu.cz, ITBiz.cz and Hdmag.cz.