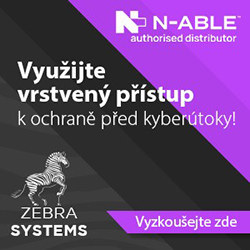 Once upon a time I have got very old but already "smart" phone MDA Compact. It had nearly dead battery and didn't work well. But I decided to port Linux on it anyway. This "howto" is summary of my very long work

First I need to say, there was some support few years back in 2.6 kernel era [1] and [2]. There were even some distributions (Qtopia based and OpenMoko), but they are now abandoned and obsolete (and they did not work with all hardware). Main problem is that those kernels were only in specific branches and never got into vanilla. Vanilla supports this hardware, but not MDA Compact specific settings. Anyone who tried to start vanilla would get white screen and frozen system. So if we want to patch vanilla Linux, we need to learn about MDA Compact platform.

MDA Compact is one of rebranded names [3] of basic platform HTC Magician, which is smartphone from around 2004. Platform is based on the Intel PXA272 SoC (system on a chip), some model from TI Calypso chipset family and few other helper chips around (notably ASIC from HTC and CPLD Xilinx).

For any hardware hacking we will need to download Intel datasheet for PXA SoC [4], SD card with at least 512MB (must not be SDHC!!) and linux bootloader for windows mobile [5] (used working version, many links to haret are already dead). I strongly suggest to flash some version of Cotulla firmware [6][8] first, you can boot event from SDHC card. HTC bootloader only supports SD cards, so for flashing you need them. Another potencial useful software is haret console [7].

For my magician I think I have used this [8] version (last version with camera support and english GUI). For flash backup creating you will probably need service manual from here [9] (page 39). Command d2s should be able to store main NOR flash and GSM chipset to SD card. Its parameters are virtual memory of bootloader and size (I flashed only once or twice). NOR flash is linear, so you probably can store whole (without dividing to bootloader + CE and extended ROM). Offsets are showed here [10]. For practical purposes you should always store image without bootloader (so start everytime from 0x80040000 offset), because bootloader automaticaly detects reflashing image if you have SD card inserted during bootloader start (so it for safe reasons: NEVER FLASH BOOTLOADER). Any MBR, bootsectors and filesystems on the SD card will be of course rewritten, so you will have to reformat SD card for any future use. I strongly suggest using linux for fast formating like "dd if=/dev/zero of=/dev/sdX".

Bootloader will need communication with host over some usb serial protocol. On Linux, you need kernel modules ipaq ( CONFIG_USB_SERIAL_IPAQ ) and HTCFlasher [11] (you can possible use only base serial terminal without HTCFlasher, but I didn't test it). In case of Windows on developing computer I think it will install drivers itself and you can use something like Hyperterminal to write command (but using Windows machine to develop linux distribution is bad idea). But if you do it in virtual machine, do not forget to blacklist ipaq linux driver or virtual machine will collide with this driver up to freeze point.

There is some older software for flashing named htc-tools [12]. It claims it can directly boot linux from bootloader, but I haven't tested it and I don't know if it is still compatible with current kernel booting structures.

Updating Windows mobile firmware for HTC Magican can be done with updating windows application. Use only Cotulla compatible update (described on his page). For Linux-only flash you will probably never need it (but Linux-only flash is still under development

). Only take notice that you will need fully charged and fully working battery and NOR flash has limited number of erasing (I know, more than 1000 times, but still ...

Booting directly Linux would seems to be funny and effective, but in reality I have spent more time in windows playing solitaire (and waiting to recharge battery) than in linux. To be able boot Linux kernel from windows, you need Haret bootloader [5] stored on linux SD(HC) card together with linux zImage, initrd and configuration default.txt file. Initial ramdisk had some problems and is optional (and memory limited), so I will describe it in the future. Haret bootloader supports remote connection (you can dump windows main memory and gpio) and in linux you will probably need rndis_host driver). Connection is handled from haret-console [7]. But is it only used for debugging, for booting linux you just can press "run" button.

PXA architecture is now pretty old and only few configurations are really in use. So some of my magician patches I created from studying other PXA configurations. I will try to get these patches accepted into vanilla kernel and I will continualy updates locations. My patches are now now against Linux version 3.13.0-rc7 and commit d11739e6d83dc17a6b54cfa23f8d7872d9ef82e2.

Main problem with boot was mainly with initial settings of the CPLD registers, but there were other problems too. One was bad order of LCD power activation. On magician we can have two types of LCD (Toppoly and Samsung). My magician (MDA Compact) has a Samsung one, so if someone has Toppoly LCD, feel free to send patches/test same sequence. Samsung's datasheet is accessible here [13] (and from many other places).

How to find sequence of LCD power activation

This operation is not necessary since this will be already in patch, but it is good information how to recreate it and as explanation of new names in patch.

One of big problem was that right after jumping to kernel the LCD went off and we could not see any debugging informations. By the way literally simplest way to debug in magician_init() was blinking with IRDA led and debugging with some old camera

, because infra module can be directly connected to GPIO when other devices are still uninitialized. LCD can be left always on (by not touching inicialization from Windows) and it was for long time, but this solution is not elegant (= not working in standalone linux) and is power hungry.

We can get LCD connector pinout from Samsung datasheet. Datasheet explains which pins are for LCD power, so we can put probe on some pins and go play with GPIO (pinout can be useful to exchange LCD for better resolution LCD). Samsung version on MDA Compact board revision (=2) is controlled by 4 GPIOs: 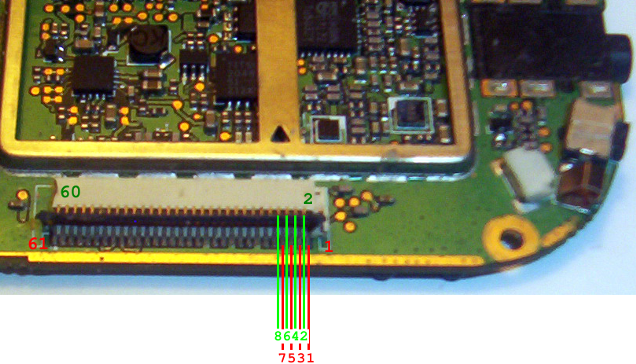 In picture above we can see connector orientation on the PCB. There are some pin numbers, but they are too small to read. Below is table with first few pins (power oriented). Connector has two rows of pins on both sides, but cable is one side only. Unfortunately pins under cable are nearly impossible to measure. Fortunately most pins are duplicated on second row, which are accessible on the back or on the top of the connector. Voltages were measured at working state and after bad sequence. Notice: values around 0.2V are probably high impedance.

For some reason GPIO75 was sometimes left as alternative function 2 (PXA pins can be GPIO or have alternative function as LCD controler, UART, etc. ). But it seems that this pin is something like STARTUP pulse and after all power lines starts, the GPIO75 is ignored until LCD is powered off. This sequence should correctly put LCD into power off state.

From measuring around connector I have found that GPIO106 controls all voltages and GPIO104/GPIO105 only VOFF/VON. So I took liberty to rename them in source code.

and during pinout voltage measuring, it showed weird values on some pins (like positive voltage on negative voltage pin etc... ).

It seems, that the DC-DC chip is the TPS65124 chip (marked "BKD") [14 updated] located between the PXA SoC and LCD connector, but I did not yet compare my suggested sequence with datasheet.

In next section I will write about camera pinout, I2C patch and soundcard.

If you like this howto or you want author to try some other crazy stuff with Magician, you can donate some bitcoins to address 1FV88JF4DDBR7XBbssRyC4aqrA3vNkzM86

Btw the worst problem is our public health insurance. I hope socialists will be extinct someday.

I hope socialists will be extinct someday.

By the time the socialists are extinct you're going to be extinct too. I, for one, am looking forward to both.
Sex is distinct from gender. I didn't have gender with your mom last night.
28.12.2014 13:21 Ovoce
Rozbalit Rozbalit vše Re: Let's teach penguin how to become magician (part 1)
Odpovědět | Sbalit | Link | Blokovat | Admin
yór ingliž not wery gůt